Linda's
This is going to be a class at Seasons's of Home in July.
See their website on the right for more info.

Liz's darling applique quilt we worked on in 2008 - finished!

"My presidents block is called Maple Star and is from one of the books in the Around the Block series. It is one of my most favorite blocks. This became my presidents block after Cat called my husband Ray and asked him what my favorite block was. He then got me talking about quilting one night and asked to see my box of quilt blocks. As we went through the box together, I talked about each of the blocks/projects. I didn't know he was on a covert mission, I just thought he was taking an interest in my quilting. Sometime when I wasn't around, Ray fished my Maple Star block out of the box and took it over to Cat. Cat then measured the block and came up with the pattern that was distributed to everyone. I feel bad about all the time and work she went through to write a pattern when it was in a book she has on her shelf. I was surprised with blocks at our Saturday quilt class--Squished Pineapple with Deena Jennings. Before she moved Kari Giacoalone surprised me with the framed block she made for me. The quilt is backed with a Monet water lilies print. Monet is my favorite impressionist. The backing fabric reminds me of my trip to Paris and the hour I spent enjoying Monet's water lily paintings in a museum.

I love to read the messages from my friends written on each block. This is by far, my favorite quilt as it reminds me of great friends and fun memories. Thank you everyone who made the blocks for my quilt!"

Deonn's
"Shantelle had called my daughter Lauren to ask what my favorite color/block was. She told her that it was the "Barnyard" block in the chicken quilt that we had done as a guild exchange the year before, in maroon and tan. I do love that block, because you can nestle every single seam and get perfect points. The ladies made the blocks and signed their names, and I put it together with sashing and posts, creating a secondary pattern which I absolutely love too! I quilted it with Hobbs 80/20 and a layer of wool batting and it's one of my favorite yummy, snuggly quilts! Love the quilt and everyone who put a stitch in it."

"The block that was chosen for my president block is the simple star or sawtooth star. This is one of my favorite blocks because it was the very first block I pieced when I started quilting. I especially enjoy when the center block is also a star block instead of one piece of fabric. There were many that "braved" making that double star block. I can't recall the name off the top of my head (I think it is called hands all around) but truthfully as with most blocks it has several different names.
I love vintage looking fabrics -shirting backgrounds and civil war era as well as plaids, checks and stripes. I requested that that participates use plaids, checks and stripes. I also really enjoy working with small to miniature blocks so my blocks were 6" finished. Given that the size of block that I prefer and requested won't equate to even a lap quilt without a high quantity of numbers I chose to look through my library and computer programs to get some inspiration for a design. I came across a few that just felt right. And waa laa my President quilt!
I did have to do some un-picking of seams in order to use the blocks in the sashing. I also asked some members that had not been part of HVQ to make a block to include. It was more important to include dear friends in the creation then to stick with only those that were part of the guild during the time I was president. As the designer - I took the liberty of doing that!"
Cat

Sherron, our current president, made all the past presidents a quilt block. Thanks Sherron for a super Anniversary evening and for doing so much for our guild.

This year our Design Challenge theme was BASKETS OF FRIENDSHIP. At our first meeting, anyone that wanted to participate was given a list of guidelines for this year's challenge. We were asked to make a 9 1/2 inch square basket block. Any pattern, any color, anything you liked. We were supposed to bring back our basket block along with 2 sewing notions to trade at the next meeting.
At the next meeting, everyone received a basket with one of the already sewn basket blocks and a few fun sewing surprise notions. We were asked to use the block we received as inspiration for our challenge quilt. We were given a few more guidelines and a couple of months to complete our BASKETS OF FRIENDSHIP Challenge quilts. Here are the results at the May guild meeting.

She had something funny to say about hers - "What freakin' happened?" She was a little distraught about recieving a 9 1/2 inch block and then making 3 more of her own to match but having them turn out 8 inches and 10 inches square!

note from the author - I did see the finished project and it was AMAZING, but she gave it away!

Rachel's
Everyone that participated in this year's challenge recieved a great participation prize - a large quilt bag. Thanks Shantelle for another great design challenge!
Posted by Rachel at 9:39 PM 1 comment: 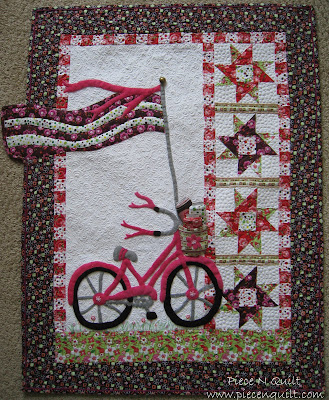 This darling bicycle was made by Kathleen, Natalia, and Whitnee for the Home Machine Quilting Show PUMP UP THE COLOR Challenge. So darling! It was raffled off for over $100 and the $$$ went to dig a wall in Kenya. Good Job ladies!

To provide a forum for local quilters of every level of interest
to meet together on a monthly basis to promote the art of quiltmaking, and:

Teach quilting and related sewing skills to one another

Show and tell current projects and ideas; provide encouragement and support for each other

Provide opportunities for charity service to our community